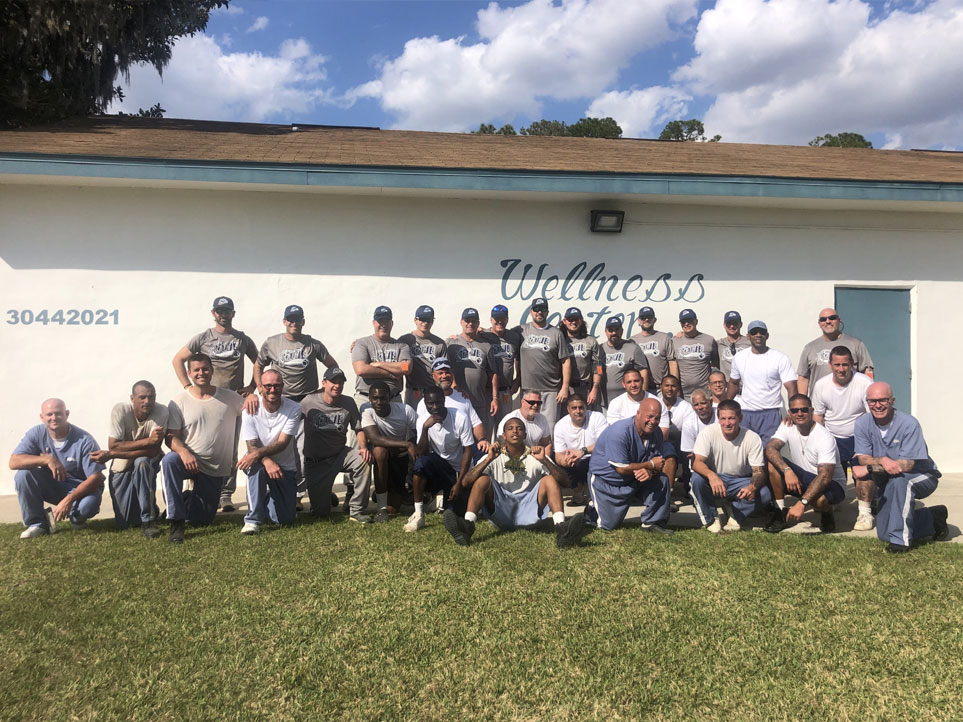 To begin my 21st season, I committed to fly alone to Orlando and join the Lightning Alley crusade to Central Florida. I was going to meet 13 guys from Georgia – only three of whom I know – and I was to pick up the 15th member of the team at the airport, a guy from WV I have never met! After not being able to minister with the Saints since October of 2019, clearly I was so excited to get back into prison and would have signed up for anything!

Having been on approximately 40 crusades in my career, I was expecting the same outcome, the same fulfillment, seeing God work, being used as He saw fit, and bonding with guys willing to serve as I have experienced many times before. Not so much… this trip was different, and my cup is overflowing!

It started out with meeting a Recreation Director in Polk Correctional Institution who told me he wasn’t just holding down a job; he was called to this vocation by God and was investing in men behind bars. He was humble and happy. What I didn’t know until we left was that he was a silver medalist for the Bahamas in the 2008 Olympics. He sold his medal to get to the US because God was calling him. Imagine a calling on your life so great that you would be willing to sell your triumphant prize possession. He truly serves to invest in men behind bars.

This started a fire inside our team. At devotions that night, as a team of brothers – most of whom we just met – God started opening us up to feed, share and love on each other. We lifted up our families at home and the supporters that helped get us there, praying for protection and blessing for all their sacrifice. I knew that first night this trip was going to be EPIC.

Day 2, we went into Hardee CI and once again we were in the perfect center of God’s will. We were asked to eat lunch with the men (unbelievably, this happened every day on this crusade). Lunch the previous day was almost scary enough not to eat but most of us did. I tried, but despite my best intentions and effort, lunch looked so bad I just couldn’t do it. Later we heard an inmate say he has trust issues, but he knew he had met guys who were real when we stayed for lunch: we clearly showed to him we wanted to continue conversations and loving on these men. Best lunch I never ate!

Day 3, we were in Central Florida Reception Center, the intake facility for all of Central Florida. Again, we found a group of Corrections Officers that genuinely wanted us there to shine some light and give the guys a special day, to the point that the fences and barbed wire virtually disappeared. A couple crazy guys on our team actually volunteered to get haircuts by the inmate barbershop! As they did that, I absolutely enjoyed lunch there by inhaling the best bologna and shredded cheese sandwich I have had in a long time. Prison food makes one enjoy the simple things!

At this point in any trip, the team is spiritually, emotionally, and physically spent. But our Father, who loves us so much, was just getting started. Our final devotional time together as a team was epic. It lasted three hours as men shared their experiences, cried to the point of sobbing how God was working – not only in front of us leading men to Himself, but breaking down the barriers in our own lives. As a team that gave us the opportunity to absolutely love each other, lift each other up, and most importantly hold each other accountable. Think about it – we just met, and God had this all planned out!! It is crazy but our God is so good.

Day 4, getaway day. one more prison, 2 more gospel messages and we are on the way home. But God wasn’t done with us yet. The Wellness Department at Marion CI is run by four people who are truly caring and investing in men that are getting out soon. They even had videos they shared with me of inmate lip-sync battles that were awesome!

The men at this prison were respectful and responsive to God’s word. We spoke with one guy named JT that is clearly being pursued by God and I believe he didn’t sleep that night until he surrendered. Without any prompting, the testimony and Gospel message that day were targeted right to his situation. Funny how God works that way sometimes!

You may have noticed there is not a mention of softball games in this recap. It wasn’t intentional, but the truth is that softball was simply the backdrop to all of the ways God showed Himself on this trip.

We collected cards with responses that showed 67 men making a first-time decision to trust Christ, 68 that were not ready but requested more information, and 280 that are already believers. We were able to encourage the believers to get with those who just made decisions and be the iron that sharpens each other. It was an absolute blessing and honor to go on this trip and be used by our Lord in this spectacular way.